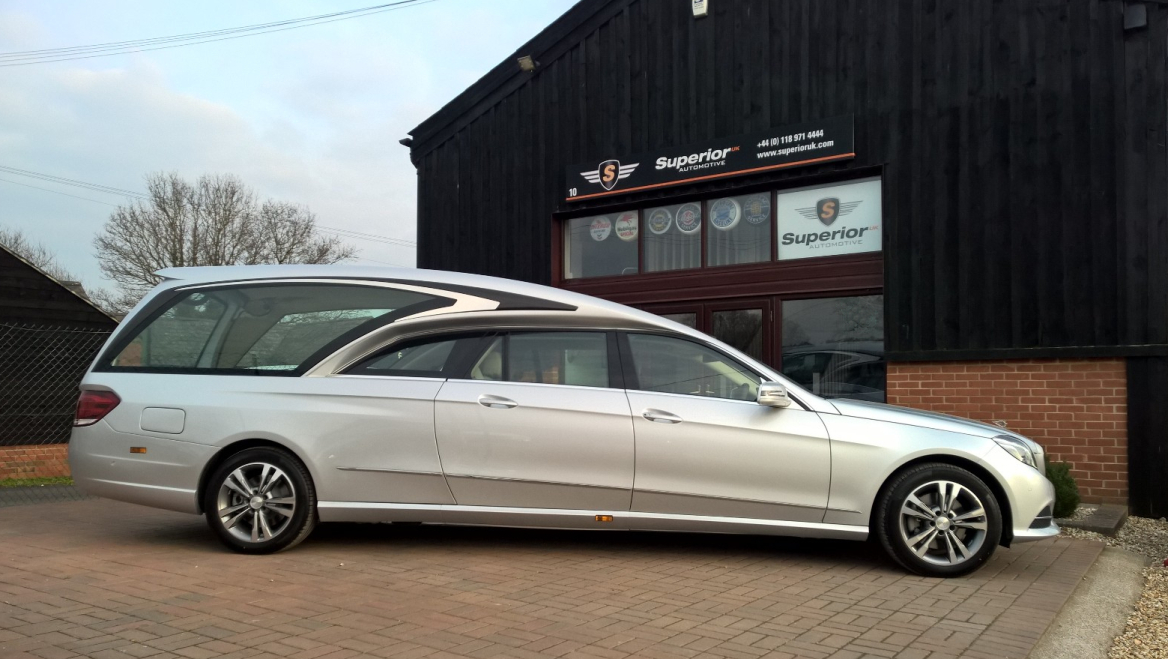 Allcock Family Funeral Services had a very special delivery in March – the UK’s first Pilato Superstella hearse. We asked brothers Paul and Philip what’s so special about their new hearse. 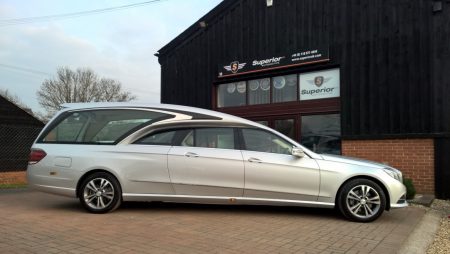 The Superstella before it left Superior UK’s HQ

When the Allcock family ordered their new hearse, they knew exactly how special the vehicle was. After all, they’d actually seen it built at Pilato’s factory in Italy.

Allcock Family FS’s Pilato Superstella hearse is the first UK example of this stunning hearse. Brothers Paul and Philip Allcock explain why they choose to be trailblazers.

“The original plan was to upgrade to the latest Binz vehicle,” said Philip “But we’d seen the Superstella on Pilato’s website, and spoken to Superior UK about it at the NFE show. We liked what we saw. The question remained, was the UK market ready for it?”

Philip’s brother Paul was the one who pushed the idea forward. “We do things differently!” he said. “Our priority is to offer the best with no compromises. We’ve always been very forward-thinking. I told Philip that I thought the Superstella would make an excellent “front of house” vehicle.”

Allcock’s commitment to progress is evident in their choice of silver vehicles. The sleek, futuristic look of the Superstella was the next step. “We debated the pros and cons of running such a distinctive looking car,” said Paul. “We considered the new Binz hearse, too, but it wasn’t enough of a step forward for us. That highlighted just how different the Superstella actually is. We will never compromise on quality, and knew the Superstella is built on the Mercedes chassis that we’re used to. We decided to take the leap.”

The Allcocks were invited to Pilato in Italy to see the build in action. They were joined there by Kevin Smith and his father Peter, from Superior UK, who are Pilato’s exclusive UK partner.

“We were able to walk round the factory by ourselves, then Barbara and Gianvittorio introduced us to the foreman. We were able to discuss our requirements about the interior, trim, and finish.” 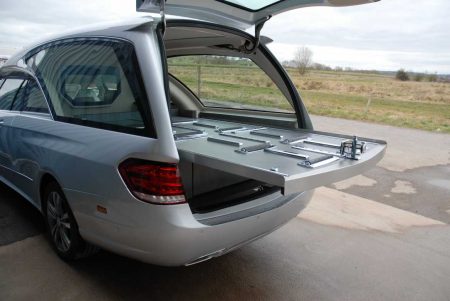 Kevin Smith from Superior was pleased that he could be there. “We have been Allcock’s vehicle partner of choice since 2008,” he said. “Paul and Philip are hands-on, and knew exactly want they wanted from their Superstella. After several consultations, we helped arrange a visit to the Pilato factory in Italy. 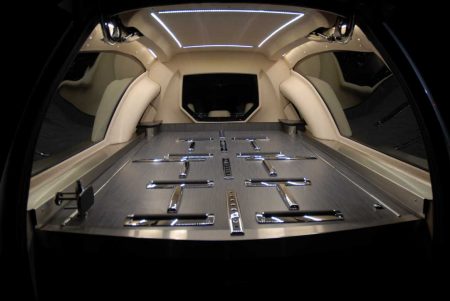 A view of the deck lit up at night

“The Allcocks wanted a custom built deck and interior. The interior trim work was installed at Pilato, and we designed and manufactured the slide-out decking system. After our visit to Italy, the craftsmen at Pilato were left to transform the Allcock’s dream into reality.”
When Kevin delivered the Superstella to Allcock’s premises in Norwich, Paul and Philip’s father Terry conducted the handover. 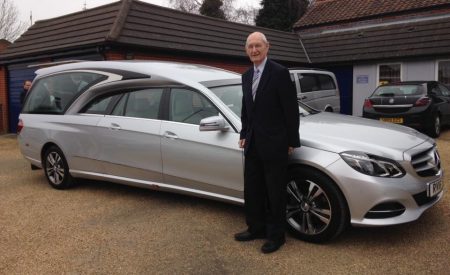 Terry Allcock with his new car at handover

“The style was even better than we remembered, the deck looked stunning, and the finish was beyond our expectations,” Philip said. “I have to congratulate Pilato and Superior UK for the way they married style and function. They gave us exactly what we wanted, and we couldn’t be more pleased.”

The new hearse has received positive feedback since it took to the road in March. “The good comments reassure us that we made the right decision,” said Paul. “The families love the design, and our team members enjoy driving it.”

Paul Allcock is the current President for The National Society of Allied and Independent Funeral Directors, making the Pilato Superstella the preferred Presidential choice!