Edwin Pounds and Sons of Bradford have come to Superior UK for their fleet and family vehicles since 2004. Company Director (and fourth generation family member) Simon Broome tells us why loyalty, trust and longevity matter in ongoing supplier relationships.

“We initially went to Superior UK in 2004 because of their industry reputation,” he said. “Everything went so smoothly with that initial purchase – and with each of our three fleet purchases in the last 11 years – that we have no desire to look anywhere else for our vehicles. Like us, Superior UK are a family firm and they share our own values of communication, attention to detail, trust and integrity.” 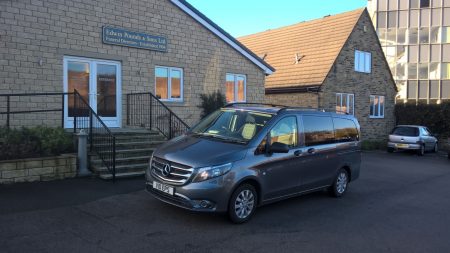 Edwin Pounds and Sons are now on their third full fleet from Superior UK, and last year took delivery of the new generation E Class hearse and limousine with their distinctive single headlamps, Sport style grille and panoramic glass roofs. Last year it became time to upgrade the existing Vito removal vehicle to a newer, more spacious model. With the help of Kevin Smith at Superior UK, they ordered a brand-new Vito 114 BlueTEC.

“We had been running the old shape Vito since 2012,” explained Simon, “but I began to think about replacing it after a long trip to Scotland on one of the hottest days of the year. The old vehicle had no air-conditioning. And the cab could feel cramped for me, since I’m pretty tall.”

The firm’s new Vito is the new 114 shape, with aluminium wheels, automatic drive, and of course air conditioning! Like its predecessor, it was custom-built to Simon’s specifications with the build overseen by Kevin Smith at Superior.

“The Superior Rise&Fall decking in Superior’s Vitos is a huge bonus,” said Simon, “making life a lot easier for us and making removals more dignified and professional. The new vehicle is a lot nicer to drive. It’s already a great replacement but I know it will really come into its own next Summer.”

Edwin Pounds and Sons was established in 1904 as a farm, coal business and carriage providers by Edwin Pound, Simon’s maternal great-grandfather, who added funeral work to the business in 1940. Edwin Pound and Sons is now run by Simon, with support from his family and the team, and occupies a large site which was rebuilt in 2009.