In 2015, Nicholas O’Hara Funeral Directors proudly took ownership of a Pilato Queen II hearse. The family firm have just taken delivery of their second Queen II, and Anthony O’Hara told us about adding a new statement vehicle to their head-turning fleet.

“The time had come for us to replace our original Queen I hearse,” explains Anthony O’Hara, who represents the third generation of Nicholas O’Hara Funeral Directors. “We have been over the moon with the vehicles we have received from Pilato viaSuperior UK. Our first Queen II hearse has been an outstanding vehicle from the moment we received it at the NFE 2015, and we knew we wanted a second Queen II.” 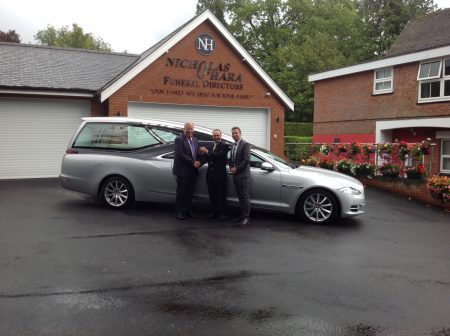 Kevin Smith at Superior UK (Pilato SPA ’s official UK distributor) took Nicholas O’Hara over from Dorset to Italy to visit the Pilato SPA factory and workshop. The two men were met by Barbara and Gianvittorio of Pilato, and Nicholas given a full tour of all the potential specification for his new Queen II.

“We have always been made so welcome at Pilato,” explains Anthony, “and this visit was no different. It’s very exciting to see exactly how your vehicle will be built and to be able to choose your specification from such a legendary factory. We had full input into the spec and finish of our new vehicle. Once my father was at Pilato in Italy, he realised we were spoiled for choice!”

“Nicholas and I spent a lot of time designing this vehicle,” says Kevin Smith at Superior UK. “Nicholas is very hands on and enjoys discussing every detail of his vehicles. The result is a beautiful hearse, with new one-piece headlining with a blue quilted leather insert, quilted leather side covers and an Almond Oak slide-out decking system. Other items requested by Nick were clear flashing LED lights covertly mounted in the front grille, an MP3 loud speak system and illuminated name plates. It is a stunning looking vehicle inside and out.”

From visiting Pilato in March, to taking delivery of the vehicle in August, the entire order was fast and smooth, thanks in large part to the close relationship between Superior UK and Pilato SPA.

“Kevin Smith at Superior UK was excellent as always,” Anthony says. “His customer service is second to none and he makes every order very easy indeed – even special and complex ones like a new Queen II!”

The O’Hara family are delighted with their new Queen II hearse, which was delivered in person by Kevin Smith in August.

“It’s a truly top of the range vehicle, with incredible styling,” says Anthony. “We get masses of compliments on it and the families love how special it is. We even have other funeral professionals taking photos of it – nobody has seen anything like it in this country!”

Kevin Smith was proud to help O’Hara with their latest Pilato fleet vehicle. “Superior UK is proud to be the official UK distributor of Pilato SPA’s Jaguar vehicles. As a family business, we always enjoy serving other family run businesses like Nicholas O’Hara. And Pilato has been a family managed company for over 50 years. We get a lot of personal and professional satisfaction out of every handover.”