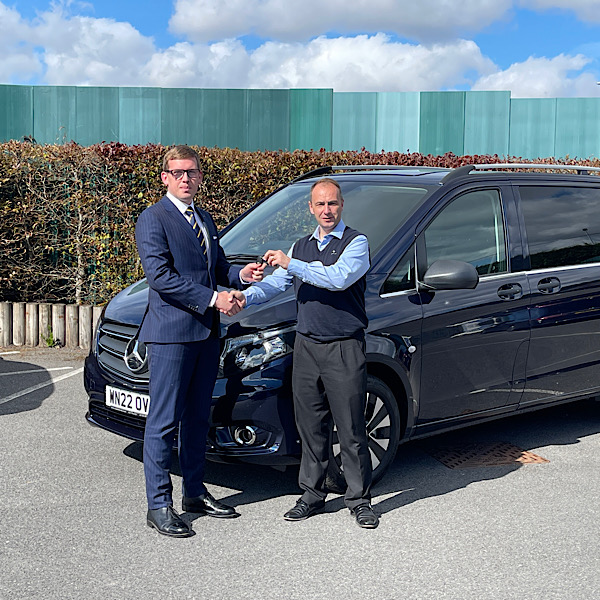 Dafydd Iles is the third generation of the Iles family to run the firm; he follows in the footsteps of his father, Carwyn Iles and his grandfather Raymond Iles who founded the business in 1985.  Dafydd explains why the Superior Vito has always been the removal vehicle of choice for this independent family business.

Dafydd commented, “We bought our first Superior Vito over a decade ago and in our opinion, they are still the best removal vehicles on the market”.  Dafydd added, “The service from Superior has always been excellent; the team are friendly, professional and helpful – we could not ask for more”.

Each of the Harp Vito removal vehicles, including the latest delivery, has been a top specification model with the impressive exterior, comfort and technology you would expect from a new Mercedes Vito, however, the interior fittings hold the features that have had the most positive impact on the business and the team who use the vehicle.

“We would never manage without the “Rise&Fall” deck, our team agree our Vito removal is the best vehicle in our fleet as it is so versatile”, said Dafydd, “we can jump in day or night being called out to RTA’s, care homes or hospitals fully equipped for whatever the situation”.

Dafydd added, “Aside from the brilliant functionality of the deck, the whole interior has a beautiful finish, not at all clinical or industrial, so we have no problem leaving the tailgate open when at a family home”.

Superior UK Managing Director Kevin Smith, who delivered the vehicle commented, “We pride ourselves on the quality of our product and service so it is always a pleasure to see long-term customers so happy with their vehicles”.

Kevin added, “It has always been a pleasure dealing with both Dafydd and his father Carwyn – we very much appreciate their business”.

This website uses cookies to improve your experience while you navigate through the website. Out of these, the cookies that are categorized as necessary are stored on your browser as they are essential for the working of basic functionalities of the website. We also use third-party cookies that help us analyze and understand how you use this website. These cookies will be stored in your browser only with your consent. You also have the option to opt-out of these cookies. But opting out of some of these cookies may affect your browsing experience.
Necessary Always Enabled
Necessary cookies are absolutely essential for the website to function properly. This category only includes cookies that ensures basic functionalities and security features of the website. These cookies do not store any personal information.
Non-necessary
Any cookies that may not be particularly necessary for the website to function and is used specifically to collect user personal data via analytics, ads, other embedded contents are termed as non-necessary cookies. It is mandatory to procure user consent prior to running these cookies on your website.
SAVE & ACCEPT