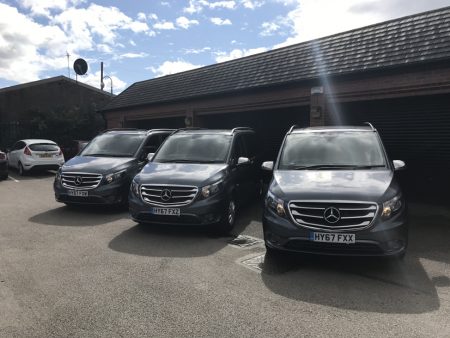 The Heart of England Co-operative is one of the most successful co-operative funeral businesses in the country, running a fleet of 27 vehicles to cover a large part of the Midlands. In September, Superior UK delivered three personalised, high-tech Mercedes Vito removal vehicles.

“We cover a large and busy area of the country,” explained Darryl Smith, The Heart of England Co-operative Society’s General Manager of Funerals. “We needed to replace some of our older removal vehicles, and used the opportunity to upgrade tonewer Vitos. The Vito has been our choice of first-call vehicle for many years, and Superior UK have always helped us to personalise the most updated version.”

The Heart Of England Co-op’s three new Mercedes Vito removal vehicles were designed to look like an MPV, not a van, with interior and exterior detailing that reflects the professional and modern image of this reputable local funeral service provider.

“We took the basic design of the Vito, and asked Superior UK to add sat nav systems, air conditioning, and exterior detailing that works beautifully with our signature Tenorite Grey paintwork,” Darryl explained. “We chose automatics to make them easier to drive. We are a modern and forward-thinking funeral business, and our fleet needs to reflect our values. The finished product looks like an MPV, which is exactly what we wanted.  They are great looking vehicles which are a dream to use.”

The three new Vito vehicles from Superior UK were designed to compliment the firm’s existing ceremonial vehicles, for an eye-catching and high-performance fleet. Every Vito in the fleet now has custom paintwork in Tenorite Grey, with colour-coded bumpers, alloy wheels, tinted windows, and chrome detailing.

Kevin Smith of Superior UK said it was a pleasure to help Darryl Smith with the latest additions to his large fleet. “We have worked with the Heart of England Co-operative for many years, and always enjoy helping Darryl with the exact specifications he needs. His latest Vitos look fantastic and we were proud to deliver them. It was great to see them in their new home, with the other removal vehicles and limousines we have sourced for Darryl over the years.”

The Heart of England Co-operative now have a full Superior UK fleet of limousines and first call ambulances, with 14 of their 27-vehicles fleet provided by Superior UK.

“As always, Kevin and the entire Superior UK team were very helpful,” said Darryl. “Like me, he has spent his entire career in the funeral industry and he is really passionate about funeral vehicles. This makes the ordering process a pleasure. We spent plenty of time talking about the specs, and finalising the extra details I wanted to make these Vitos personalised and unique. I couldn’t be happier with the outcome.”

The Heart of England’s new Vito vehicles have been well received by the co-operative’s drivers and the families they serve. Superior UK are proud to be part of the story.